The Jamal Crawford half week-part III: the beginnings

Share All sharing options for: The Jamal Crawford half week-part III: the beginnings 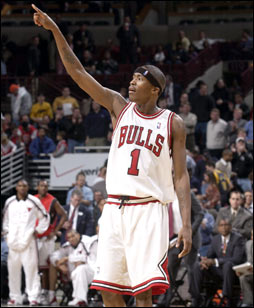 With time comes the ability to truly evaluate, so with our third and final interview, Matt at Blogabull gives a free write retrospective of Jamal Crawford's time with the Chicago Bulls. Thanks again to Golden State of Mind, Posting and Toasting, and now Blogabull. And without further ado, the final installment of the Jamal Crawford trilogy.

Crawford was as much a part of the Curry-Chandler years (i.e., last days of Jerry Krause) as, well, Eddy Curry and Tyson Chandler. Unlike those two he did play a year of college, but it was shortened due to suspension so he was as raw as a prep prospect.

A year later as a restricted free agent, Paxson used Crawford in a sign-and-trade deal with the Knicks, attaching Crawford to the long-term deal of Jerome Williams to acquire expiring contracts and get the Bulls out from the salary cap mess Paxson inherited. It wouldn't be the last time Pax used a player's potential to sucker Isiah Thomas, and Crawford wound up never fully realizing it.

So it was not a surprise when Paxson became GM that he used his first lottery pick on Kirk Hinrich, signaling that Crawford was no longer the future point guard of the Bulls. He never fit in that season either playing with Hinrich or for new coach Scott Skiles. http://bulls.blogspot.com/2004/02/2-cs-thats-right-its-only-2.html

He was similarly gifted to be a good defender but never showed the commitment to it. It kept him from improving and he stayed a slightly below average player in his entire tenure, despite a scoring outburst here-or-there, including having the Bulls first 50 point night since Michael Jordan retired (http://bulls.blogspot.com/2004/04/so-while-not-historic-jamal-certainly.html). During his Bulls career he came to help symbolize what was wrong with the 'Baby Bulls' of that time, and then-announcer John Paxson often singled Crawford out for selfish or lazy play.

Crawford back then (and I suppose still today) was frustrating to watch as his talent never meshed with his game. He has a really good handle and was big for a point guard, yet he rarely ventured into the paint or got to the line. He'd flash an amazing crossover dribble, shaking his man to only step backwards and launch a 20-footer. He rarely takes shots in rhythm or off of passes, he was out there to create for himself, though still not in an efficient way.

Thanks again to Matt.

And so there it is. The Hawks have Jamal Crawford. In every sense of the phrase, for better or for worse.