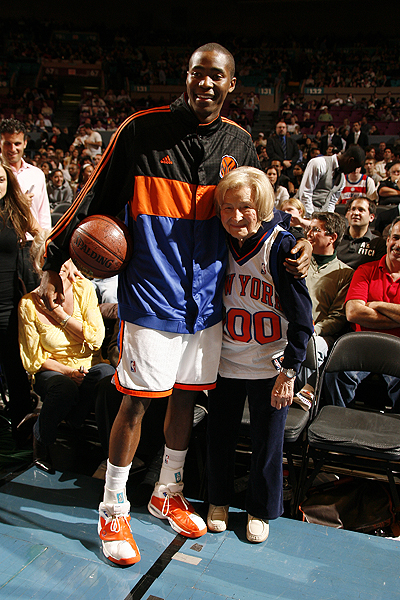 Seth at Posting and Toasting (just another great blog on SBN) was kind enough to follow suit with Golden State of Mind and answer a few questions on our new BFF Jamal. Despite playing during some of darkest days of Knickdom, it seems these four years might give the best indication of what Crawford can, cannot, and won't do on the court. Thanks to Seth for reliving the Isiah day for us. I am sure it is no easy feat.

A brief forward from Seth to start it off.

I should note before I say anything that I love Crawford. He's extremely talented, shows great character, and can single-handedly pilot a win when he's on. That said, he's usually not on, and it's something you either learn to accept or die trying. Some answers to your questions

How does Crawford help a team win? How does he help a team lose?
P&T - Crawford helps a team win because he is capable of hitting a shot from absolutely anywhere on the floor. He helps a team lose because he's fully aware of that fact. Jamal pulls and pulls and pulls without ever hesitating. On some nights, this makes for an otherworldly display of offensive prowess (as in the '07 game against Miami in which Crawford hit SIXTEEN straight field goals en route to 52 points). On other nights, fans must avert their eyes.

What do you miss most about Jamal Crawford?
P&T - What I miss most about Crawford is his handle. Every once in a while, Jamal busts out some of the most jaw-dropping dribbles known to man. His signature move is a sort of staccato behind-the-legs dribble, which he can do while running. Grown men have wet themselves at the sight of that move. It's like the Magnum of crossovers. (http://www.youtube.com/watch?v=dvSZx-iyziQ)

Was his defense really that bad?
P&T - Yes, it was.

Why did your team get rid of him?
P&T - The Knicks got rid of Crawford because of his lengthy contract. If he hadn't been such a financial burden, I'm certain Jamal would've hung around and flourished in the D'Antoni offense.

How much did Crawford being an Isaiah acquisition taint Crawford?
P&T - The Isiah association may have tainted Crawford slightly, but I'd actually say that Jamal was one of the few Knicks to really grow during those horrible years. In fact, perhaps his most progressive season was under the demon-coach-who-must-not-be-named-who-currently-coaches-the-Bobcats. Crawford never really got caught up in the nonsense. He just minded his own business and made sweet, sweet music on the court.

Thanks again to Seth. Stay tuned. Jamal Crawford half-week roles on tomorrow. What a ride!