Are the Atlanta Spirit good owners?

Share All sharing options for: Are the Atlanta Spirit good owners? 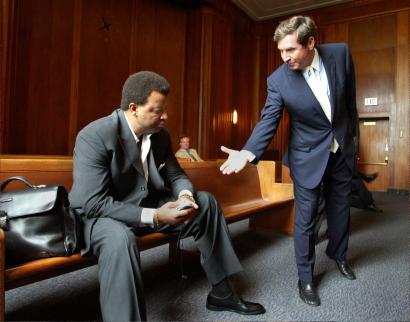 The Hawks have new owners! They are the same as the old ones. Steve Belkin is back making decisions. It is just that his decisions still don't matter. We are back to 2005. Everyone go sell some real estate.

It is really hard to believe the Hawks ownership has been in limbo for almost four years. This could end up lasting the entire length of Joe Johnson's contract. And in that four years, all the Hawks have done is improve. There are people, people who have some credibility, asking whether Atlanta is a contender.

It is very weird then that the ownership is maligned while the team succeeds. Over the last four years, the Hawks have been under the salary cap when they were bad and under the luxury tax when they were decent. The organization has shown a willingness to spend (whether you agree with how they spend is another matter). When the roster is filled, they will be near the max possible.

But of course, the Atlanta Spirit are bad owners, everyone is ready to get around that rally cry. Well what makes a good owner? Here are some possible characteristics.

The ability to spend money: Paul Allen of Portland is often given this label and it is taken as a huge positive. Well, Glen Taylor, the T-wolves owner, is worth over 2 billion dollars.

Spending money: It seems Phonix could still be a true contender if their owner didn't sell draft picks or refuse to match Joe Johnson's contract. But would Mark Cuban spend money if he didn't think his team could contend? And how did they rise to contention? With guys they developed (and did not buy) like Steve Nash and Dirk Nowitzki. The Knicks have always been good at spending money. So good in fact, they are trying to unspend at an amazing rate.

One major owner: Avoid that whole Atlanta mess. Look at Jerry Buss or Peter Holt (San Antonio). Well here is a quick rebuttal, Donald Sterling. Need another? Robert Johnson. I would cry almost daily if I was a Bobcats fan.

Involvement: There is something very cool about a Mark Cuban on the sideline of every game. There is nothing cool about the Devin Harris for Jason Kidd trade. Then again, LeBron James has been to more Davidson College games than Michael Jordan has been to Bobcats games, a team he part owns.

Connection to the community: The cover boy here is Peter Hold in San Antonio. He has poured into that community and there is a die hard support for the team. However, they have had two perfectly timed number one overall picks and besides those years, they always are good so it is not like one needs to twist arms to find fans. And is there anyone more connected to the community than Sterling? He owns more low income housing than anyone else in LA. I kid, I kid.

Owning one team: Quite a few owners have double dipped. Paul Allen owns the Seahawks and the Blazers. Stan Kroenke of the Nuggets has his hand in roughly 200 sports ventures. Neither is considered a bad owner.

In the end, it is of course winning that makes an owner the best. You could have 20 owners or 1. You could have a billion dollars or ten. If you win, you are good. Was Wyc Grousbeck a good owner before the summer of Kevin Garnett? Should we give him credit for that move or Danny Ainge? Good owners win. And of course every team wants to win, they want to fill seats, but what they really want to do is do those two things while they make money, and if they can only make money while not winning well making money is going to win out.

Well, the Atlanta Spirit have increasingly fielded a team that wins, and they have slowly begun to fill Phillips (last year saw the most tickets sold in the arena's history). The only thing they have not done is made money. Which from a fan perspective is the least important of the trifecta.

I am not saying the Atlanta Spirit is peaches and cream, one long joy ride of confusion and fights. This court battle is embarrassing regardless of it relatively low impact it has had on results. They kept Billy Knight for too long, and the reports that Knight wanted to fire Woodson and ownership refused are more than a little disheartening. But these gripes of any fans with owners of teams that are not winning championships. They are not necessarily gripes about bad owners.

Maybe the Atlanta Spirit are not as out there as Mark Cuban or as successful as Jerry Buss and sure I hope the sale of the Thrashers is on the horizon, but the owners are involved and do spend money and desire to win.

Michael Gearon is at almost every single game with his kids on the front row. He is an Atlanta guy. I shake hands and have been thanked by a part owner on numerous occasions for coming to the game. My friend who has season tickets calls his ticket rep all the time, and they actually talk. There are fan forums and draft night parties and any number of perks. The owners have fielded a winner and fielded a team that could remain so for a number of years.

Yea the bickering between millionaires over how many draft picks to give the Suns is a bit ridiculous, but these are business men that want to give away or get as little or much money as possible in a divorce of an ownership group. They cannot help that the legal system exacerbates this attribute found any good business person.

The Atlanta Spirit are never going to be the main cog in fielding a championship team. Rick Sund, the coach, and the players are. I hope if the core Hawks exceed expectations in their development the owners will be willing to push luxury tax limits, but it is bad business and bad long term planning to do so now.

Now, the owners have done exactly what a good owner should do and allowed for the securing of the good talent they drafted for the long term at no more than market value.

The Atlanta Spirit are not perfect, but they are not the laughing stock the legal system has turned them into.

Atlanta is a great NBA town despite what anyone might say. The TV ratings prove as much. It just so happens that many of those million or so NBA fans happen to be fans of other teams because those people come from other cities to our town.

If the Atlanta Spirit started treating the true blue Atlantans and the fully transplanted locals as the small market base which they really are, I am under the belief that our ownership and this team can be fully embraced by the city of Atlanta.

And then, once and for all, we can say we have good owners.