An Offseason Guide to Fixing the Holes in the Hawks' Game

Share All sharing options for: An Offseason Guide to Fixing the Holes in the Hawks' Game

While the NBA offseason continues to slog on (also known as we're all waiting for LeBron in 2010 and the economy sucks so we're not spending squat), I'd like to offer up my quasi-serious review of what every Hawks player will need to improve this off-season if the team expects to that next step up the Championship Ladder.

Just in case you're curious, we'd be moving up from Marginally Interesting to Legitimately Spunky. Still a few rungs away from Team that Nobody Wants to Play. We'll break it down into two categories Keep on Keepin' On - what the player needs to continue to do - and Stop Me Before I Shoot Again - what needs to get fixed, now. (Note: this includes only players returning from last year's squad, and those with an NBA track record. Jeff Teague gets a pass.)

Without further ado, after the jump:

KOKO: Great at backing down a smaller defender. Creates well in traffic, and I'm particularly in love with that little floater he loves to chuck up when he gets a head of steam in the paint. Probably the most athletic below-the-rim, 6'7" player I've seen.

SMBISA: When two or more opposing defenders begin to collapse on you, get rid of it. Work it around the perimeter. Two guys on one player means somebody's open. Stop dribbling the air out of the ball and hucking up 20 footers with 4 seconds left on the clock.
Most importantly, stop being mute. Speak. Yell. Get in someone's face. We need a leader, and you're supposed to be that guy. Slap Josh Smith with a clipboard in a huddle, I don't know any fan that would complain about seeing more fire from our supposed Alpha Dog.

KOKO: If his prior stints are any indication, he's like a homeless man's Joe Johnson. Can create his own shot, especially with a decent mid-range game. Hasn't shot anyone.

SMBISA: Crawford is a hybrid player, combining all of the worst attributes of Josh Smith and Joe Johnson into one player. So maybe a personality transplant would help him stop the ball-hogging and a consistent whining to the refs/coaches/fellow teammates, and maybe playing defense for once in his life.
Seriously, Mike Bibby is incapable of guarding a tree at this point. Crawford just chooses not to, which I consider a far bigger failing. As bad as Bibby was on the defensive end, you could always tell he was at least trying to stay in front of the lawn chair he had to guard. 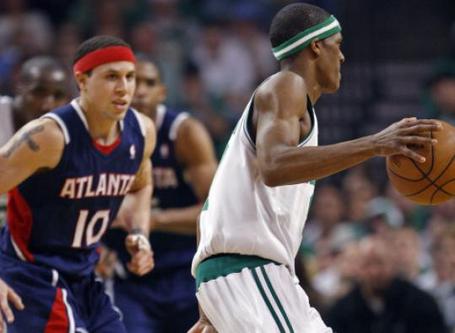 Mike Bibby KOKO: Continue shooting threes at a career rate. Keep telling Mike Woodson about his stupid play-calling and game management (see here). More alley-oops to our streaking wing and frontcourt players. I like the eternal internal debate he has about going with or without a headband. (Definitely with Mike, definitely.)
SMBISA: As I mentioned with Jamal Crawford, somehow rediscovering the ability to defend anything. Sadly, Bibby was never the best defender in the league, but miles upon miles have made him no more than a doormat for the better perimeter players. Woody was forced to try to hide him at various points during the season by covering the other team's small forward, only to get abused in the post. Outside the rare, good defensive play (a key steal here or there), its like the Hawks largely play 4 on 5 on the defensive end against a good point guard. His only saving grace are two decent shot blockers, Horford and Smith, who can attempt to bail him out. Never a guarantee though (see Tony Parker's game against the Hawks at Philips this year as evidence). 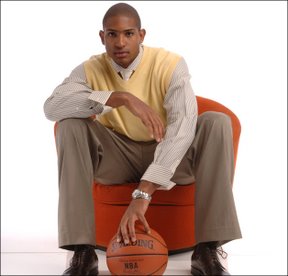 Al Horford KOKO: How in the world you maintain a sunny disposition is beyond me when all you get are garbage buckets and a coach who fails to realize you have some offensive talent. Keep that, and your exceptional rebounding skills, going.
SMBISA: Injuries. So far, nothing major, just the nagging sort that come from playing basketball for a living. But we really do, as Hawks fans, miss having you in the line-up night in and night out. I'd argue more about what you need to improve, but I feel like we're only seeing the tip of what you're capable of, driven in large part by the Iso-Joe offense's inherent limitations. 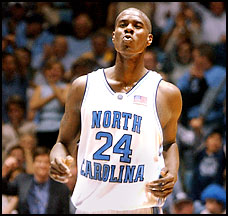 Marvin Williams (this presumes Marvin will return to the Hawks.) KOKO: Your duck butt is truly something to behold. I now understand where your crazy hops come from. As you showed when Joe was injured this year, you've got the skills to go to the rack. Do that, a lot. Keep stroking threes with one of the prettier jump shots around.
SMBISA: Like J-J-J-Joe Johnson, get some fire in that belly. Yell. Push an opponent. Show some fire. From that aggression should come greater production, both in rebounding and scoring.
Mo Evans KOKO: He's not horrible at any one thing, yet can't think of any distinct moments Mo had in the last year. Just avoid total embarassment while making spot three's and the occasional rebound or mild defensive effort.
SMBISA: Again, completely unremarkable. The only complaint I have about the guy is his faux interviews on the Jumbotron during timeouts (What person would you most like to eat dinner with?) were mildly annoying and nowhere near as fun as Zaza. 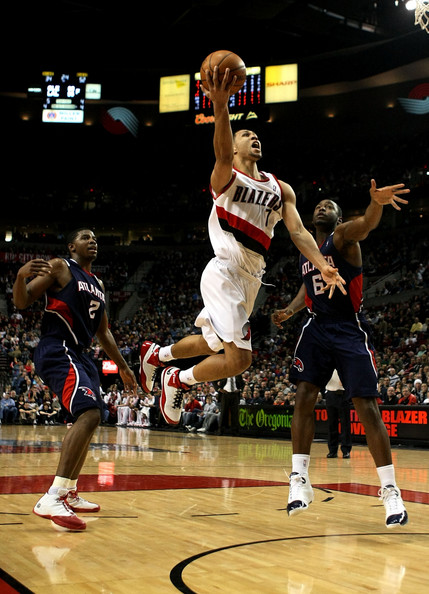 Mario West Greasy (Same situation as Marvin.) KOKO: Keep on smilin' and having a generally nice personality. Showing up to Hawks community events is a nice plus. The nickname Greasy is the best thing I've heard in a long time.
SMBISA: Basically everything related to being on an NBA arena floor at game time. He is, without question, the worst NBA player I've ever seen. I could probably write 5,000 words on what's wrong with Mario West being on an NBA roster, but I'll mention three examples on things he should avoid doing in the future. First, don't, on an uncontested dunk attempt, create: 1) A turnover to the other team. 2) A technical foul on yourself. 3) A missed dunk. Second, don't commit six personal fouls in eight minutes of play. Third, don't get posterized on a LeBron James 45-footer in the playoffs. I wish I could make those things up. Two of those things I've seen in person. The other I got pleasure of seeing on national TV as LeBron torched the Hawks. 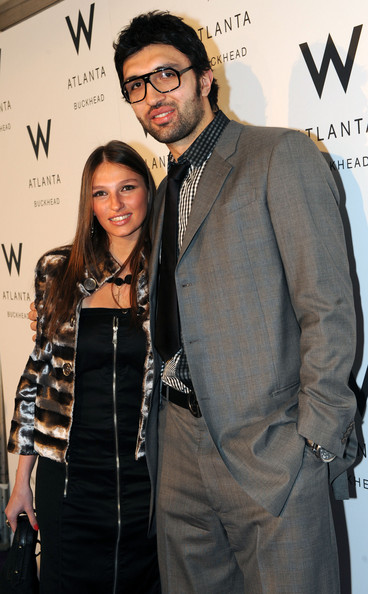 Zaza Pachulia KOKO: Being a prodigous rebounder off the bench. That 10-15 foot set shot you have can be smooth. Would be nice if our coach ran a few pick and rolls with you once in a while. Keep getting in Garnett's face, it makes me giggle. You've got passion that few players on the Hawks have. And you rock those ridiculous in-game Jumbotron videos.
SMBISA: The backne. Seriously, see a dermatologist. You can afford it with your new contract. Thank Zombie Jesus I sit in the third deck at games so I don't have to see too much of it. Find something of a more reliable back-to-the-basket move. The face-up stuff is fine, but pulling you 12 feet from the basket to shoot also pulls one of our few decent rebounders from under the rack. Two years ago, this entry would have been 1,200 words about how you collapsed as a player, but I really was surprised by his game last year. 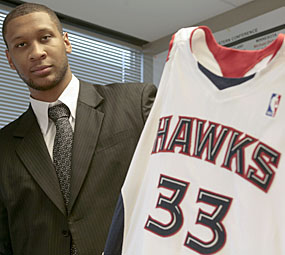 Randolph Morris KOKO: Keep being a 7 footer, because...
SMBISA: That's likely the only way you'll stick anywhere for any length of time. Seriously, why did we sign a guy who notified his college team he was leaving by fax machine to a multi-year deal? This is a guy who Isiah Thomas thought would be the Knicks answer in the post. Really? We're taking Isiah Thomas' cast-offs now? I could go on about how he needs to work harder on this or that, but really, all I want to see is Randolph look like he cares for one game. Seriously, every photo is exactly the same blank expression, whether he's in the game, on the bench or unconscious on Marietta St. Seriously, look at that photo above. That's his expression AT THE PRESS CONFERENCE ANNOUNCING HE'S JOINING THE TEAM. If you can't get stoked then, when will you? I can only figure they signed him because Woodson can't reach certain things on high shelves, and needs someone on the roster to reach up there. 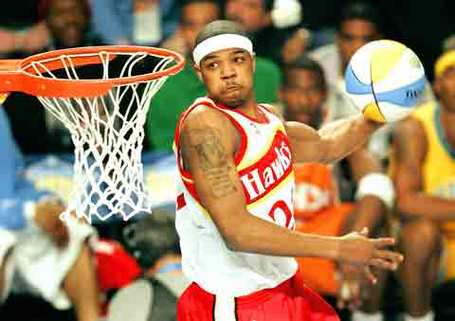 Josh Smith
KOKO: Being an electrifying player when you want to be. The blocks, the dunks, the playing to the crowd. We get it. We like you, mostly...
SMBISA: Turn that "when you want to be" into "all the time." We love you, except when you: Take a jump shot, try to get in a defensive stance, sit on the scorer's table during timeouts and not listen to your coach, whine to the refs about every call or non-call, pretend you're Magic Johnson leading a fast break and dribble the ball off your foot or throw a wild pass into the third row, become too friendly with the other team.
Basically, your game outside of dunking and blocking shots is a trainwreck.
You're a power forward who thinks he's everything but that. Stick to dunks and blocks, try to learn to defend and work on that nice turnaround hook you showed a bit in the playoffs. And hit a free throw every now and again. That plays well in the cheap seats.
You're essentially the most talented player on the roster, who uses those gifts about 5 percent of the time. As Jeff Van Gundy so astutely pointed out on the telecast of the Cavaliers/Hawks series, you've been in the league going on six years now. We're only going to talk about giving you time to put it together for so long.