Share All sharing options for: Is Jeff Teague different from Acie Law? 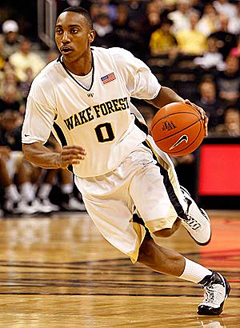 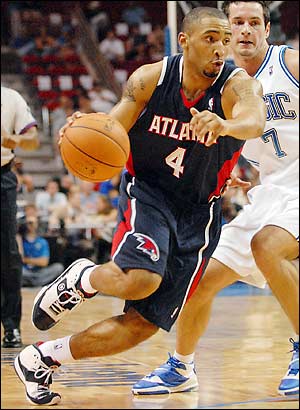 Could it be clearer? Acie Law is Jeff Teague. Jeff Teague is Acie Law. Finkle is Einhorne. Or at the very least, Mike Woodson will make that comparison a match no matter how true the reality is.

It seems to be an open and closed case. Jeff Teague either is or will be forced into being just like Acie Law. If no major skill jumps off the page forcing Woodson to play him, our coach has never shown a pension for wanting or having the ability to find minutes for young point guards.

It all makes sense. And it is all so wrong.

Is it a bit of a cheap argument? Of course. Does it say something about their style of game? It must.

Acie Law has two game winners. Great game winners. And they have well deserved youtube videos. But that is it. He makes no other substantial appearances. Jeff Teague has highlight mixes. He hurts peoples' feelings. He dunks. He crosses over. He hits the three. Acie may do a lot of that, but not with the athleticism of Jeff Teague.

Acie Law finished four years of college. Jeff Teague finished two. Both guys improved every year. So those similar stats at this juncture with Jeff only being a sophomore would seem to dictate that Teague would have been a better player as a senior than Acie Law was.

Acie increased his scoring each year from 7.5 his freshman year to 18.1 in his senior season. However, for many of the important stats behind that point increase, the large jump came between freshman to sophomore year. His fg%, assist total, and rebounding numbers all jumped very close to what would end up being Acie's college career highs.

The two biggest improvements that did not show themselves until Law's senior year were three point shooting and the ability to get to the line. In a sense, Acie found the two easiest ways to score more points. In leveling off early in the other areas of his game, he also demonstrated the player he would be if he ever understood the NBA game as well as had come to know the college one. Acie had improved and then peaked in most areas of his offensive game by his senior year.

As a sophomore, Jeff Teague scored more points than Acie Law did in his senior year and accomplished the feat with less shot attempts. Teague had roughly the same efficiency and PER (17.4 and 24 respectively) as Acie did in his senior year. But compared to Law's sophomore year, Teague had an almost 6 point advantage in PER and four point difference in efficiency. (All stats from Draftexpress.com).

Stats can prove just about any point of course. But as you look at the entire picture, you see two guys at the end of their sophomore year. One (Teague) is noticeably statistically better and has a style of game and an athleticism that seems to suggest drastic improvement could continue. The other player (Acie) has a game that had reached its rough peak and would only be able to add a more nuanced approach to scoring.

In a point guard/combo guard heavy draft, the Hawks have a player that may have been drafted lower than Acie Law but who offers a much greater upside that will force the team to pursue that potential. 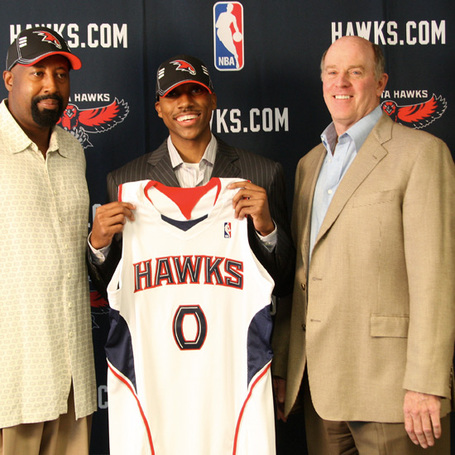 via i.cdn.turner.com
The GM Affect

I understand Woodson has a penchant for forgetting players exist on his team. That he used to bring Josh Childress in at the same time, for the same person (Marvin), every game for an entire year. That he decides his player rotation and sub pattern by picking out lottery balls with each players name on it in mid October. That he only eats whole chickens for dinner. I get it.

But if for one second, you think Rick Sund is going to let Mike Woodson stifle, in any way, Teague's development, you are on the crazy train taking the crazy pills. Jeff Teague may in fact be the same kind of player Acie Law was or at least the kind of player Acie was allowed to be in Atlanta, but we are darn well going to know.

GMs don't want their draft picks to fail. It makes business sense, it makes personal sense, it makes basketball sense. You just do not draft a guy to play five minutes less in his second year than he did in his first. I am not saying Teague will come out averaging 20 minutes a game, but his playing time will be much more calculated than an 18 minutes stretch followed by 2 DNPs and then a six minute go at it.

Mike Bibby has a three year contract with the Hawks. Going into the final year of said contract, the team will have two seasons before they will tender Jeff Teague a contract and possibly sign him to a long term deal.

Jamal Crawford will no longer be under contract. Bibby will be 34 by the end of the season. A very old 34. The timing works both in terms of need and development for Jeff Teague to be the starting point guard in 2011-12.

Acie Law was drafted in a point guard light draft where the Hawks only real pressing need after drafting Horford was at that position. He joined a team needing to make the playoffs and he was not ready to lead them. The Hawks went and acquired Mike Bibby, and with a year and half left on his deal, the trade knocked Acie off his path to the starting spot. By the time the decision rolled around whether the organization needed to resign Bibby, a point guard heavy draft was at hand and Acie's potential or lack thereof was not enough to keep the Hawks from moving on without him.

Teague joins a team that has enough talent and skill to make the playoffs without having to go out and get a piece at point guard, and the player ahead of him on the depth chart has an end date.

All this mumbo jumbo is a very long way of saying the path ahead of Jeff Teague will not change and has an end. Acie Law had neither of these things.

Is Jeff Teague a starting point guard in the NBA? Obviously no one knows that. But does his talent, skill, and situation give him the opportunity to be one? You darn right. Acie Law and Jeff Teague have two things truly in common; they will play the same position and have the same coach in the NBA.

Mike Woodson may do the same thing, every game with each specific player. But he does not do the same thing for every player every time. And Jeff Teague's upside and skills and the organization's timeline, makeup, and leadership will make sure Mike Woodson boxes Jeff in a new and different box.