Atlanta Hawks 91, Miami Heat 78 or where I gush over Joe Johnson to the point of inappropriateness

Share All sharing options for: Atlanta Hawks 91, Miami Heat 78 or where I gush over Joe Johnson to the point of inappropriateness

Joe Johnson did not come to Atlanta for the money. He asked the Suns not to match the Hawks offer.  It was no mercenary signing. Man was going to make his cash. He came to be the number one guy, and people can say that is the wrong priority to have. They can make fun of Atlanta for giving up too much, but how fitting, in the biggest game this franchise has seen in probably since the 7th game of the 1988 series against Boston, Joe Johnson was the star. He may not be the number one option on every team, but he is on our team. And I am damn proud to have him.

Do you know what Hawks basketball was like when Joe Johnson arrived? I would sit in the upper deck confident my heckling was being heard. If you were drinking at the game, you got drunk. No lines at any concessions. It was a dangerous situation. People mocked the city, the fans, the whole deal. And look what Joe has helped build. Some may only want to talk about the super stars. They may only want to write articles about the dynamic personalities, but what Joe has been the nucleus of is truly impressive. In fact, he says it quite well himself.

"I envisioned this," Johnson said, "that we would be playing in front of a packed house, and that the fans would be going crazy."

Of course I would rather have Dwyane Wade over Joe Johnson, and Wade did some spectacular things this series, but the closest thing Dwyane did to match Joe Johnson's three from about 40 feet out he could only muster on with a bank shot. And Wade was not fouled on his play. For people who think Joe is not assertive enough, not quite skilled enough, just plain and simple not a number one guy, name three players in the league who would take the shots Joe took tonight....and make them. Joe may not be the best every night, but when it counted, he was.

A brief look ahead

I struggle to envision the Hawks winning against the Cavs. Cleveland is the better team, with the best player, and holding home court. But the Hawks just played four games in seven that won't be the Cavs by 20 (may not even beat the Cavs at all) but will make for a hell of a game. What I am saying is that odds are long, but in know way should the team or the fans be satisfied with a first round victory. The Hawks just entered into a new seven game season, and if they lose, that season is a failure. Plain and simple. The Hawks can hang with the Cavs. The question is does the team think they can beat them?

If the 2007-2008 Hawks played the 2008-2009 Hawks, we may have seen the exact series we just saw. Any team with Wade is a scary team, the blowouts some how sullied the whole series. Like no good basketball was played. But inconsistency on one side should not be an indictment on the team that played well. The Heat played well for three games, but in the end, the maturity and balance of the Hawks, won out. Hats off to the Heat. They did not just randomly surge this year. The team is headed in the right direction. Also, did I just use maturity and Hawks in the same sentence?

Turnovers have been the lynch pen the whole series. One way to change that. Don't let the other team shoot. The 17 turnovers by the Hawks helped them score easy baskets and push the pace. All around just great defense. I assume Mike Woodson is in the Atlanta rain somewhere pulling a Shawshank. 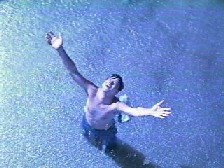 Game thread comment of the game from Bronn, "I am falling love with ball movement. I have a feeling she is going to cheat on me though."

Can the Hawks play more consistent? Are they able to play at this high a level against a better team? Is the team capable of keeping their composure and come back when the go down big? Mike Woodson?

For one night, it does not matter. Enjoy the win Hawks fans. It has been a long road. We all deserve it.