Share All sharing options for: The good Mr. Mutombo 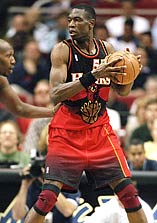 Dikembe Mutomobo, a man who won two (and half) defensive player of the year awards with the Hawks and pretty much represents all that is right with basketball, went down with a career ending injury last night during the Rockets Blazers game.

To a man who gave Atlanta the finger wag, toughness, and all out effort, and more importantly to a person who gave the country of Congo a hospital, we salute you sir.

In a boy's game, you were always the best of men.