Share All sharing options for: Knicks 109 Hawks 105 or where Josh Smith turns into Eddy Curry 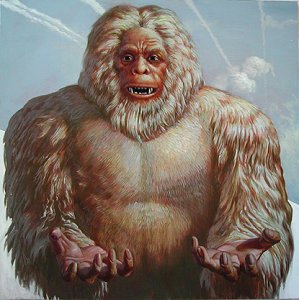 Josh give Yeties a chance!

Some may look at Josh Smith's point total and his ability to go 7-10 from the field and think at the least he had an acceptable performance. Those people would be wrong, and they would be punished.

One only needs to watch two minutes of his effort last night, but I have yet to find a two minute clip where the camera could handle focusing on him. So let us just look at some other numbers sitting just slightly behind the pretty ones already mentioned.

0 assists, 0 blocks, 2 rebounds (both defensive), 4 turnovers, plus/minus of -17. If you are simply in a good mood and want to ruin, watch the game again and watch Smith play. His effort is frighteningly low. He does not box out. He does not close out on shooters. He does not run down the floor offensively or defensively. It is bad and it is unacceptable. Two rebounds by your starting power forward against a bad rebounding team in a game you lose, in part, because of missed rebounds is a bench worthy offense. Josh Smith was a more athletic, less offensively skilled Eddy Curry last night.

And I just threw up.

A look back at my precursors for winning.

Larry Hughes takes more shots than David Lee. Well props to Bronn for having more confidence in Mr. Hughes than me. Or put another way, thanks for jinxing it Bronn. Larry shot and Larry hit. D Lee! just needed to set screens and run down the floor faster than anyone on the Hawks.

Marvin Williams drives to the basket ten times. Marv made 7 of the 11 shots near the basket. Good job Marv. He made 1 of 6 jumpers.

Al Hoford ends the first half with less fouls than David Lee. Not sure, but neither were in foul trouble and considering D'Antoni played two starters with two fouls in the first half, it apparently would not have been a problem anyway. Stupid Woodson making me think certain things matter when they don't. Let's generously call this one a push.

Josh Smith makes more than 60% of his free throws and shoots more than five. Not 60% and not even four of them.

Joe realizes he weighs 40 pounds more than Larry Hughes. Half his shots came from jumpers. So no. But that is fine, since no one else on the team seemed to notice that everything time they were close the basket, the ball went through the hoop more. It's cool those 23 three point attempts were fun in their own way.

Mike Bibby's makes more three pointers than Chris Duhon. Push, each making one, but Duhon took one less shot to do it.

So there you go the Hawks got two out of six and lost. I am a prophet. Either that or I arbitrarily found six things to look at that may or may have had an effect on the game. Yea come to think of it, I am definitely a prophet.

I will leave the other side of things, where one says something of the past, to Al who I assume spoke understanding the ease of which he could have scored 35 points last night.

"We really just got away from our game plan," Hawks center Al Horford said after working the Knicks for 20 points, 13 rebounds and two blocks. "We played well the past three games, even though we lost one of them. But we came out tonight, played well in the first quarter and then tried to outscore them. And that wasn’t our script."

Ahhh, if only Al was player coach....

Comment of the game was borderline incredible from Bronn:

Whenever Josh Smith hits a trey, somewhere, a Yetti dies.

That one might win awards at the end of the year.