Share All sharing options for: A David Lee Story 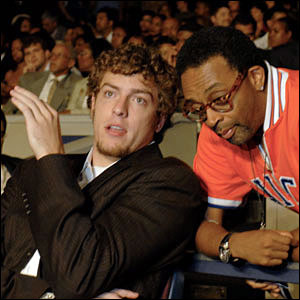 To answer your question, yes, that Hawks fan very much creeps me out.

Ever since I destroyed all true connection David Lee has to the university of Florida (a process I call Horfonating) I have been able to love his basketball skills with all out passion.

In honor of the Hawks playing him tonight, here is my one and only David Lee story that barely involves David Lee.

It was Hawks blog night 2008. Micah Hart was able to get us into the locker room. It was all kinds of awesome. I unabashfully stared at one player after another. I looked in their lockers, took serious note of the carpet. Professionalism did not enter the forefront of my thoughts.

We interviewed Al Horford. I asked a question so lame if I told it you would honestly stop reading this blog. It involved his time in college and I have blocked everything about the five second interaction from my mind except for the fact that I know it happened.

And in the background of all this, the Knicks were playing on the large tv that projected out toward all the lockers. At the time, the Knicks were at the peak of the Isaiah debacle so I was relatively shocked the game was even on.

But all the players were really into the game. I almost felt ashamed for not watching more Knicks games myself. Then amidst bloggers fumbling their words asking Horford about something he only answered because he was nice, a shout of emotion came from Marvin Williams I have never seen or heard since. Soon, the rest of the Hawks joined in.

Mr. David Lee had just dunked on someone, and all of a sudden every single one of us could not have been more excited to be there.

So many parts of this story I cannot explain, but one thing that is not in doubt is that it is awesome.