Atlanta Hawks 86, LA Lakers 76 or where Zaza does not care if he upsets you

Share All sharing options for: Atlanta Hawks 86, LA Lakers 76 or where Zaza does not care if he upsets you 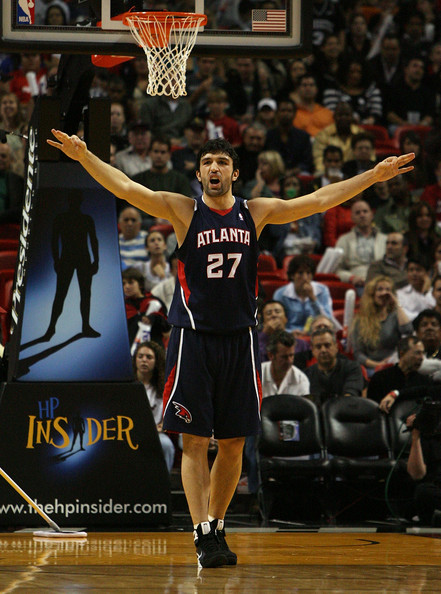 Zaza makes a very wide "V" for victory to emphasize his awesomeness.

Ladies and gentlemen, your November Atlanta Hawks are back. Where stingy defense and three pointers reign over a kingdom of victory.

It is a dangerous way to live, but shoot if it doesn't feel good.

And if you want to find something negative about this game (and I certainly will later in the recap), try and remember this, the Hawks handed one of the top three teams in the league a loss, and Joe, Al, and Josh only provided 23 points on 35 shots. I don't care if the Lakers missed open shots or forgot to play five guys, you take that win and feel good about that win.

On that defense or where Mike Woodson almost smiles

The Lakers shot thirty five percent. 76 points is the lowest point total for LA all season. They only had 14 assists.

Mike Woodson, so excited his defense first mentality now has a crowing game to point to for the rest of his coaching career, decided to go buck nutting in his post game.

This was probably the best defensive game we’ve played all season.

The thing is I am not sure if I can argue with the man. I can't off the top of my head at least. Of course if you watched the final five minutes of the game, you are laughing at this recap right now. You are preparing your mocking comment. You are saying anyone can win if the other team literally cannot hit a shot. And its true. The Hawks went cold minus a lucky Bibby three and a Flip jumper, but they did not get lucky. If this game happened in reverse, we would be saying how the Lakers just took their foot off the gas. We would be talking like we talked after the Boston game or the Cleveland game. The Hawks earned that cold spell. And all those Laker misses, they were jumpers. Settled for jumpers.

My new favorite past time is noting how easy Zaza would be to hate if he did not play for the Hawks. This single reason is enough to offer him a contract this summer. He is dirty, he celebrates too much, he sets hard screens, he pushes, he pulls, he gets offensive boards, and self padded stats, he is glorious and I want to buy his jersey.

When he plays all out, it is just bag of ugly awesomeness. The man had a double double in 22 minutes. I wish I was at a bar right now and Zaza was there because I want to buy him a beer.

Game thread comment of the game from Bronn with  "At the beginning of the year, if you had told me the Hawks could be beating the Lakers at halftime behind the good play of Zaza Pachulia and Flip Murray, I’d have replied "I don’t work for the CIA, so I have no idea what the counter-sign is."