Share All sharing options for: It's hard to hate for 82 games. 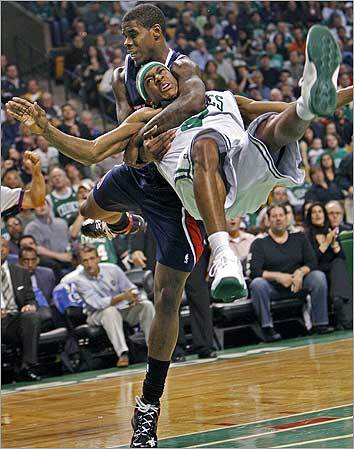 I am not ready to hug the Celtics, but it's just not quite the same.

The Boston Celtics are back in town tomorrow night, and I am excited to head down to Phillips to take in the action. Still, I look at the posts from the past two Boston games on my old blog, and back then, despite all knowledge that I would be mocked by basketball elitist in Bean Town, I declared how important those games were to the Hawks and to me. Boston was a rivalry. And in a rivalry, every game is a statement game.

But 82 games is a lot of games. It is a grind even for the fans. Some would say its too many games. It makes the season a job even for the most adamant supporter. But I can't go that far. If the season ended at 65 games, Hawks fans miss the excruciating awesomeness and pain that is Mario West playing more than 30 seconds. If the season ended after 50 games, Hawks fans might not be able to forgive Josh Smith for his enigmatic effort. He would be hated and that would be the end of it and that would be sad because Josh Smith is far too complicated to shorten into love and hate. 82 games allows you to fall in love with your team and still disdain parts of it. It allows for areas of gray that make your team part of your actual life.

Still, something is missing with this Celtics game. The excitement is just not there. Maybe the Celtics were already like this way back in December. They knew they were in the playoffs. They had a chance against anyone in May way back in November. Now, the Hawks are in the playoffs, there chance is solidified. John Hollinger's predictions no longer need refuting statements. The Hawks next first round series is now far closer than their last one.

Don't get me wrong, the game still matters. The fourth seed matters. The bad effort against Tony Parker matters. My dislike of Paul Pierce matters. This is a circled game. It just is not a sweaty palms game.

I guess that is the price of 82 games. Loyalty sometimes sacrifices excitement. This may not feel like the same kind of rivalary I felt in December, but I still hope the Hawks beat the hell out of the Celtics. And that is a level of hope I don't feel going in to very many of the other 81. Go Hawks!