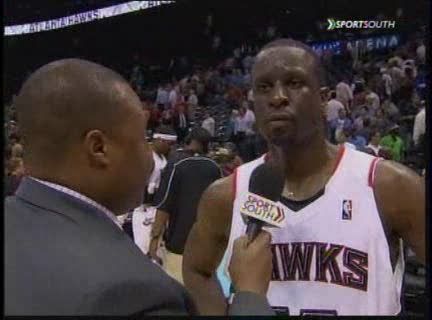 Thanks for asking that question James, and no, I can't think of anyone who does not not like hot Flip.

Most people would say one would be hard pressed to take anything meaningful from last night's game other than the fact that the Hawks magic number to make the playoffs is down to one. Those people of course would be wrong.

Last night's takeaway? Hot Flip cannot be stopped. And no, you cannot point to the borderline zero effort defense put forth by the T-wolves. Because Flip took the same extremely advantageous post up jump shot over a smaller defender in the second quarter that he takes almost every night he gets that match up, and he hit is with the same success and ease. And the fourth quarter, it was not bad defense that allowed Flip to go buck nutty but in fact, just his uncanny ability to take and make questionable three point shots. Of course, when hot Flip is in the house, those shots stop being questionable after a while and you I just start screaming "I want more hot Flip" to the great confusion of everyone else in my house.

Runner up from Acie4Mvp for its Chris Farley show like quality, "one time, i drove home from a Hawks game and [hot flip] was driving next to me."