Share All sharing options for: Atlanta Hawks 96 Dallas Mavericks 87 or where it is almost time to pass the kool aid 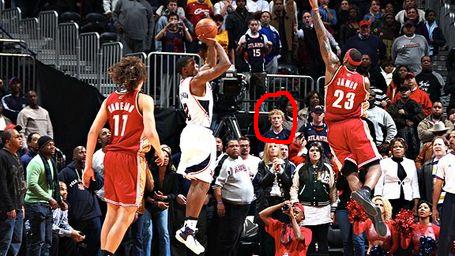 How close are the Hawks to being more than good? This close.

Look between Joe and LeBron to how perplexed I am over that fact.

Well, of course, now seven is a biblical number too...

Lets see, the Mavericks are not tanking to get in the Lottery? No. And they are not resting their starter with the their playoff seed wrapped up? Nope. Well does the team really care at this point in the season? Can't say for sure but, I did see Jason Kidd fly into the stands after a ball and Dirk scream at teammates all night.

So your telling me the Hawks just beat them plain and simple? Yes that is what I am telling you.

I mean you certainly want to see this energy and effective play translate to the road. But the Hawks did not just win last night or on this home stand. They dominated. Not one lucky win in the bunch. And one could always point to a lack of evidence away from the Highlight factory, but people talk about Utah's ineffectiveness on the road as a hangup.... to winning a championship. A championship people! Of course this is kool-aid talk. And I don't totally mean what I type. I don't think the Hawks are a Utah or a championship contender, but in the space of seven games, it would be tough to argue against that fact.

In the preview, (pump my own chest) I said someone new needed to step up and young Flip did just that. With Bibby in the game, the mismatch that should have been with Jose Barea could not materialize because Bibby could not guard him on the defensive end and Mike's best offensive move, the long jump shot, left the fact that Barea is 5'5'' unexposed. Flip came in and just started posting up ans scoring. Again and again. He hurt Jose's feelings.

That is why I love Flip. He is smart enough to recognize mismatches and bold enough to never stop shooting. There in lies Mr. Murray at his very best.

The three guards that played for the hawks put up 45 shots. The entire Hawks front court attempted 23 shots and made 56% of them. I can only remember three times when Al or Josh got the ball in an honest to goodness post position. The Hawks run a Joe Johnson/guard heavy offense. I get that. I also get that the Hawks need to feed the post more. The two things are not irreconcilable.

Comment of the game thread by Buzzsaw: "I wish Flip Murray's life was made into a Spike Lee joint."