Atlanta Hawks 119 Sacramento Kings 97 or where the Hawks front court hates the rim.

Share All sharing options for: Atlanta Hawks 119 Sacramento Kings 97 or where the Hawks front court hates the rim. 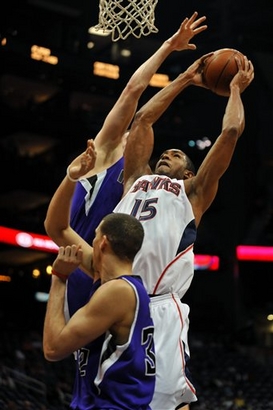 I am just going to assume this attempt ended successfully.

Forty is an important number. It is biblical of course. And I always liked that mystery it therefore carried. It is one of those breaking point integers. You can go without food for 4-6 weeks. Forty-ish days max. Forty is a number that you don't arrive at with simple talent or dumb luck. Forty is one of those numbers that makes you ask questions like "what exactly do I have here?" It is not a milestone that cements your fate. Forty is a way of saying I have gotten this far because effort and help, and on the other side of forty, I have equal parts present skill and past accomplishment to do what i want. The Hawks now have forty wins.

Al Horford apparently likes his nickname. "The Boss" decided to only shoot the ball  via dunks or "and 1" opportunities. If those were not options, he simply chose to pick up an assist. The only thing that worries me about his game is the fatigue of his flex celebration. (How do I know about flex celebration yo ask? Well, I was a 14 year old boy. I know what extended periods of flexing can do to someone.) Tease Sacramento's defense all you want, given the opportunity, Al could have done whatever he wanted out there. Not many NBA players can say that on a given night, no matter how bad the defense is.

I could probably write three to four more paragraphs about how I love Al so...

Outside of the Hawks front court domination, the night can best be summed up by Joe's game. He shot the Hawks out of the lead in the first. He stopped shooting in the second, making his only two shots, and the team stormed out front. Then Joe threw it up six times in the third and the Kings cut the lead. As the fourth quarter opened, I was freaking out that the Hawks' best option was down low, yet Joe was shooting AND he was walking out to put the finishing touches on another 44 minutes game. Then Joe went on his own 7-0 run to put the game away. Moral of the story? Let the big fellas work more inside when it is working. Despite my ardent belief that it was actually more luck than skill, Woody managed the roster well tonight. Joe is relentless.

Three things. I have said it once and I will say it again. Josh and Al both get double doubles and things seem so much easier. In all seriousness, Josh Smith probably has blisters from dunking the ball so much. Finally, if Josh is going to shoot a three, I guess I want it to be a desperation buzzer beater to end the half.

The Hawks now stand 12 games over .500 for the first time all season, and Al Horford is totally awesome. Yep, that about sums it up.