Joe Johnson, credit where credit is due?

Share All sharing options for: Joe Johnson, credit where credit is due? 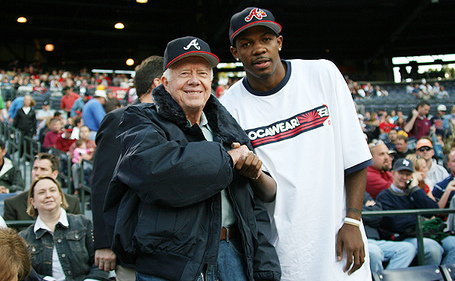 Of course Jimmy knows who to give props to.

I did not even think to give Joe Johnson credit for last night's win. I gushed over a crazy person for eight sentences and never once mentioned that Joe threw in 31 points and dished out 9 assists.

Joe Johnson merely shot the ball 50 percent, scored 30+ points, and was perfect from the line. Tossed in (9) assists also. And Hawks Nation shrugged.

That is exactly three more sentences than I gave the stellar performance.

Recently, Micah Hart brought up the conversation of whether Marvin Williams was underrated, and I right liked that idea. Joe Johnson is not underrated. I would never say such a thing. I do not know if have heard from the Hawks, but he is a three time all-star. Anyone that is deemed worthy of 70 million dollars and two first round picks can never, ever be deemed underrated. Still, Joe does miss out on the credit he deserves.

On nights when Joe "freaking" Johnson shows up, he earns his all-star birth. He gets lauded with praise. But on nights when other players do well whether it be a Josh Smith or Mario West or Acie Law, the credit for the win goes to them. We expect Joe to achieve a certain level, and the other players put the team over the top.

That is the curse of being anti flashy and lacking the skill of a person who takes over games. (I am not saying Joe can't take a over game, he just doesn't do it regularly. Only about four guys in the league do. Don't be sad.) Still, I do not remember the last time the team won in spite of Joe Johnson's performance. He has not had the most consistent year, but he is a vital part of every win the Hawks get. One game he may only score 14 points like he did against Houston, but he will add 14 assists. He will ball hog but play great defense. The Hawks might be able to win without Marvin, but right now, they cannot beat good teams without Joe Johnson.

Joe arrived in Atlanta to a team that was an equal mix of painful and horrible, and he has brought them to a place where they are competing for the fourth seed in the East. When people look back at the Hawks assent to credibility, I think Joe will get his fair (and large) share of the credit.

Finally, here is a question for you to chew on. Does Joe Johnson have a game like anyone else in the league? A bigger version of "x"? A less athletic version of "y"? For someone who shows no flash, you would think someone could easily copy his game, but I can't think of anyone that compares outside of maybe Brandon Roy. Joe Johnson may just be his own category, the most nondescript category of basketball player in the history of the game.