Share All sharing options for: Atlanta Hawks 100 Utah Jazz 93 or where a man who cannot shoot a basketball helps the Hawks win 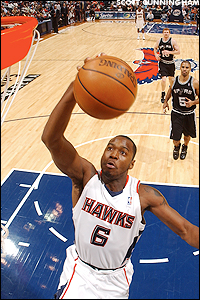 Did I really witness the low point of the season for Hawks in Charlotte last Friday? Don't get me wrong. It felt like the low point. Anytime you are being heckled by Bobcat fans you know you are at least near the bottom, but now, we may be able to make it official. That was rock bottom. I am not going to take credit because that would be ridiculous. Ok I am going to take credit. Sitting about ten feet from the Hawks bench, in the fourth quarter, I stood up and started screaming at the bench. "You know you are playing for the second round right now. You know this effort is for the second round. Not going to get there without home court. This is ridiculous." Al Horford turned and gave me a look of death, but then he turned away and just nodded.

Fine I have nothing to do with this turnaround, but the Hawks are playing eerily similar to that 6-0 Hawks that started the season. One large defensive lapse sandwiched between great defense. Contribution from a variety of people, and all-star play from Joe Johnson. The only thing missing is a serviceable Mike Bibby. Those undefeated Hawks contained lots to complain about and these Hawks are no different. Foul shooting may will be the Achilles heal of this team if does not improve. When the offense has run so much better as an actual offense, why would you return to the Joe dribble around play? There are questions and there are complaints, but when Josh is playing hard and shooting over fifty percent from the floor are you not going to let him shoot a few jumpers? These Hawks are not perfect, but they are scary, and I like scary.

As Mario West landed from his most successful self body launch toward the basket, his hands undoubtedly ringing from what one can only refer to as a "thunder dunk," sports south cut to the bench where Joe Johnson and Mike Bibby were laughing. They were not standing shocked or wearing that "oh you just got dunked on" face. They were sitting, laughing. Because NBA players are not suppose to do that kind of thing. It is ridiculous. Every time a shot went up, Mario turned into a missile. It is hard to call over the back when you are horizontal to the ground bee lining your body toward the rim. Even NBA players that try hard do not try this recklessly hard. Mario West lacks the skills that every other NBA player needs to sniff minutes, but he is also better than anyone else in the league at something. Being out of his mind crazy, and three and sometimes fourteen minutes in a game, that can play a very nice role.

"This is the type intensity we need going into the playoffs," Joe Johnson said. "We’ve been good at home, but knowing what’s at stake, we’ve played with even more intensity these past two games. It’s about having the will and figuring out a way every night to pull out a victory. That’s our mission right now."