Share All sharing options for: The Marvin Williams Injury 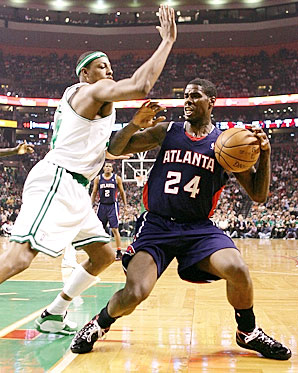 From the very beginning, the vagueness of Marvin's injury and specificness of its location (the back) put a deep cloud of freak out over the preceding. Whenever an agent is publicly involved two days after the injury, things are not good. At this point, the most positive sign I have seen from anyone close to the Hawks goes something like "hopefully, Marvin is not done for the year." I think I would rather be lied to and told it was "day to day." I know they can do that. Speedy has been out with a pulled hamstring all season. But alas, the dark cloud has settled so it is time to put on the "what if" hat and travel down the Marvin-less road that might be the rest of the season. 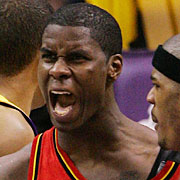 Don't get so mad. I am only doing this list so I don't look bias.

The places Marvin's absence may benefit the Hawks.

In the end, I struggle to see how anyone could argue that straight up the Hawks are better without Marvin Williams. He just brings too much to the team. Simply from the depth issue, the Hawks need him. Still, this is not a death blow. The Hawks can make the playoffs without him. Maybe even win a series. If he can come back this year, it would be huge because Woody will have been forced to build up his bench and we will have a vital cog to both ends of the floor for the playoff run. This team has enough talent that if stars aligned that come playoff time the Hawks could really surprise some people for the second straight year. Don't think for a second Marvin is not one of those stars.