Unless I have lost my mind, I think I can say Mike Woodson has lost his.

Share All sharing options for: Unless I have lost my mind, I think I can say Mike Woodson has lost his. 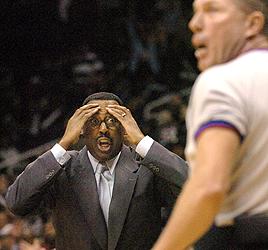 I am really not sure how I missed this quote from Mike Woodson.

Since I began blogging close to two years ago, I have never taken it easy on Mike Woodson. I probably missed some opportunity to give him credit where he deserved it. And in some instances, I probably misplaced blame through some ignorant rant on basketball squarely at his feet. There are certain things he certainly deserves praise for. I just struggle to write them down without ending by saying, "but overall Woodson is not good." And that is unfair and borderline immature.

All that is to preface, I think this quote is one of the biggest indictments against what he is dong as coach and maybe even what the organization deems important.

"But my whole thing with the minutes and everybody talking about him playing too many, I was just trying to push for him to make that All-Star team. Because that to me, was extremely important for Joe, for our team and for our entire organization."

Are you serious? We have worn down our best player so the Hawks are represented in the all star game? We have taken away touches for Al Horford in the post so our best player can play one on five in the same area? We are more worried about one player making a meaningless team so that he can play in a meaningless game than we are winning actual games? Is Woodson that far out of touch with reality? I feel like I am taking crazy pills.

Maybe the quote is taken out of context. Maybe I am reading way too much into it. Maybe I am just too hard on a coach that is dealing with a dysfunctional franchise that doesn't even  know who owns it.

But I will just say this. For the right price, it's available. Any takers?