Share All sharing options for: Hawks 105 Kings 100 or where Shelden Williams is the real winner

Sekou Blog (which I don't entirely agree with)

I am glad Mike Bibby likes that building. Over and above, the Hawks lack of effort in the second quarter, Mike Woodson's idiotic foul maintenance of Josh Smith, Joe's off night month, Bibby played well. I am in debt to that man because, with a loss, walls would have been punched, hands would have been broken, unanswered questions would have been asked, Shelden may or may not have smiled. So thank you Mike, except for the Shelden part. I would have liked to see that. His smile makes me smile.

Horford gets 12 shots. Hawks win. I have mentioned that correlation before.

Yea, Horford's performance was Moses Malone-esque. But he still got his twelve shots, and personally, I don't care. Feed him the ball until he proves he can't do it. And by prove he can't do it, I mean repeatedly proves he can't do it because all four other starters have proved at one time or another they cannot do it and it has never stopped Woodson from calling plays for them. Anyway, Coco agrees. And that is good enough for me.

On this lack of feeding the post, Woodson's offense consists almost exclusively of sets that you would run at the end of the game. The Hawks basically play sixty 24 second games. Isolation, drive and kick, dribble to run down the clock and shoot. During the retrospective highlights of Mike Bibby in Sacramento, I saw Bibby make a cut to the basket for an easy layup. When is the last time Bibby cut to basket? When is the last time anyone cut to the basket? You just don't have time for backdoor cuts at the end of the game.

But seriously, can we run an actual offense please?

Finally congratulation to the Bronn/Hawksdawgs 1st annual 2006 Hawks draft class showdown (known on the streets as HDCS) winner Shelden Williams. He beat out Solomon Jones not so much by performing well but more by not performing as badly. And that seems more than fitting. 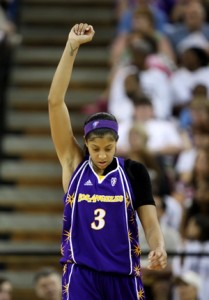 Five million a year and this? Best. Husband. Ever.

I was frustrated by the win last night, but certainly it did not keep me up at night. The teams below the Hawks in the standings lost, and this is a survival, not a style, road trip. Win one out of three to close and head back to Atlanta.