You should have voted for Al Horford

Share All sharing options for: You should have voted for Al Horford 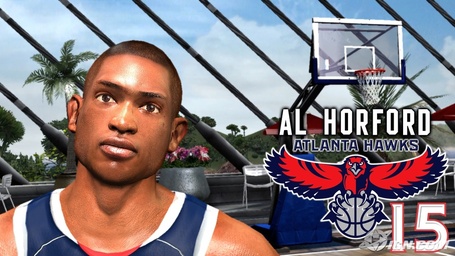 In the poll earlier in the week on who help the Hawks most if he stepped up his game, I voted for my future best friend Al Horford. I would not argue against Josh, Marvin, or Joe, and I won't here in this post. I will just argue the crap out of being for Horford.

This entire season Al has taken more than ten shots exactly three times. In those games, he went 9-18 in a Hawks win over Chicago, 9-12 in a win over Milwaukee, and 6-12 in a victory over Charlotte. Combined in those performances, he went 12-18 from the line.

Three games with more than ten shots. Zaza put up 12 attempts last night, and granted it was in what my friend called, "the worst double double he had ever seen" with a bunch of attempts off his own miss. The point remains, Al needs more touches. Zaza is now trailing Horford by one with two eleven plus attempt nights. If Flip Murray gets 17 games so far where he can chuck up more than ten shots, surely Al can find some more opportunities at that basket (and I am a Flip Murray fan).

Horford's field goal attempts are actually down from last year going from 8.2 to 7.8 shots a game (last year he had nineteen games where he shot more than ten times). Yet his percentage is up. He has made 4.1 of those attempts each year.

In the fourth quarter, when we usually resort to the Joe Johnson isolation for eight to ten minutes, Al Horford has drawn a foul 41% of the time he shoots it in the quarter.* If the Hawks are going to have a smaller, quicker center, is this not the time to use him, when the other team's big man is tired and more foul prone?

Still, the Hawks have a weakness inside. When the outside shot does not fall, the team has neither the patience nor the practice of hammering it inside. Then, we have Horford who has shown modest improvements in his game in less of an opportunity. A player known to have a high basketball IQ and one you would therefore think could grow into quite an offensive force with continued experience. And one who has shown he can shoot more than ten shots and make over fifty percent in the small sample size he has been given.

I picked Horford because the truth is, the Hawks need more points from the block and seem to have the skill set to get them in Al. Where need meets opportunity is where the Hawks can improve the most.

So here is to Al stepping up, and here is to the coaches and players letting him do so.

And I know at least forty four of you disagree so have at it.