Zaza go rent you a car!

Share All sharing options for: Zaza go rent you a car! 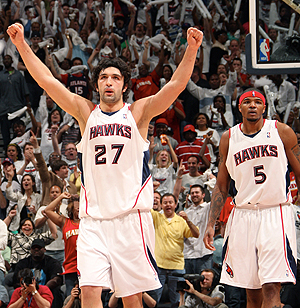 Zaza Pachulia, the man my friends and I affectionately have dubbed Shrimp Boat, turns 25 today. And it is on days like this, it is nice and maybe necessary to step back and enjoy a player for what he is a person....in this case, a person who legally changed his name to Zaza.

I have always been fascinated with Pachulia. I named renamed my first blog after him. I worked tirelessly in the backyard trying to perfect his "and 1" finger tap. Really, how can Zaur Zaza not intrigue you?

Here is a man who has been playing professional basketball since he was fourteen years old. I was still two years away from talking to girls at that age. Here is a man that in his entire life has only seen fleeting glimpses of his home country in peace.

Zaza left Georgia as a young teenager because why wouldn't he? He was tall and coordinated and asked, and that is really all you need. He moved to Turkey and while it makes perfect sense to do so considering his country's wore torn past and present, he was still fourteen, and he still didn't know the language or the culture and he definitely didn't know about the traffic of the country. He found himself in as a fourteen year old professional. And he has never stopped doing basketball as a job since then. That may sound like your dream or it may not. But it is certainly intense.

And yet he worked hard enough to be drafted into the NBA, and he moved again to another country and another language, only this time further a way.

Now, he makes NBA money so its certainly not a "woe is me" story, but it is a survival story.

Because here is man who has made Atlanta home. A man who does trivial things like give great interviews and stand up to bullies and each of these gestures show a little more that he loves this town.

And yet still has a true home very far away. A home that forces him onto CNN where the only side he chooses is the one against war. A home that needs more basketball courts so he buys the Hawks old hardwood but a home that really needs peace most of all. And Zaza knows that because his mom still lives there too.

Zaza does things like take red eyes to get green cards. He is a guy who performs the dirty work on the court but one that wants to be on GQ more than Sports Illustrated. He is man that has so much more going on and yet most of the time, all I want him to do is not turn the ball over so much. And I think we are both fine with our relationship mostly centering on that last part. Zaza is a basketball player and I am a fan. That is where we live most of the time. But some days it is nice to remember how complex and cool life is and today maybe is one of those day...or at least one of those posts.

Because today Zaza is 25. So happy birthday Shrimp Boat. We are glad you are an Atlanta Hawk.

Zaza talking about living in Atlanta.

Zaza ain't scared to learn how to make money.