How complicated are preseason minutes?

Share All sharing options for: How complicated are preseason minutes? 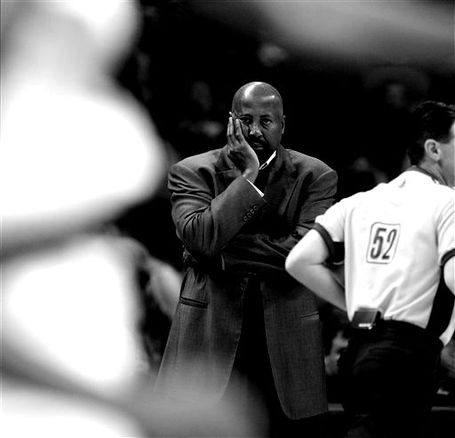 Apparently, much, much more complicated than I thought. Then again, I was putting it around the level of eye blinking.

Mike Woodson wants us to know (via Sekou Smith) that unlike in past years, some starters are going to play light minutes in the preseason.

"So I'm going to use this exhibition season a little bit different. I don't have to play Josh Smith and Joe Johnson 30-plus minutes a game. In the past we might have."

Woody knows these games don't count right? They don't count.... right? Added depth should not matter in fake games. I am sticking by that until someone can prove me otherwise.

Marvin though has some interesting quotes to continue my re-education on pre-season minutes, but in a less stupefying way than our coach.

"I'm a rhythm type cat but I'm also a younger cat," Marvin Williams said. "So I'd probably like to play a little bit more. But if you take a guy like Joe, who's also a rhythm guy but also a vet, it's not going to take a guy like that long to get into a flow."

Ok, close to as stupefying. So he talks about needing minutes to establish rhythm. Makes sense, but then you get in vet vs. young and my mind starts to spin a bit. Maybe this job of managing minutes is not as easy as I thought. Especially when you have guys that must find a rhythm and others who will play the same no matter how many minutes they get (I am looking at you Josh Smith) in pre-season and younger and older and new to the team and not..

I am no basketball coach, have never played one on tv, but no matter how complicated these minutes are it still sounds like a little communication might be in order for this team. Now, I am all for guys being ready to play when they are called on and them maybe not knowing when that is, but I hope by the end of pre-season, our first round draft pick and starting center are not shoulder shrugs when asked what their minutes are likely to look like this season. We have a GM who preaches embracing your role. Tough to do when you don't know what that is. Then again, maybe that is what preseason is for.

Fine, I take it back Woody (well, everything but the fact that these games don't count). You do have a tough job managing these minutes. Good luck to you sir.