An Interview with the play by play voice of the Atlanta Hawks, Bob Rathbun

Share All sharing options for: An Interview with the play by play voice of the Atlanta Hawks, Bob Rathbun 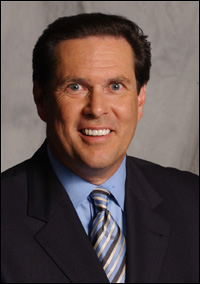 Bob Rathbun has been calling Hawks games since 1996. He has seen it all and never ever let any event on the court, no matter how horrible or great, get in the way of his perfect hair. He is a top notch tv guy who brings passion and insight to, what will this year, be all 82 games. But my favorite thing about his bio is this:

Since 2004, Rathbun has spearheaded the organization's Speaker's Bureau, where he works on increasing the profile of the Hawks, Thrashers and Philips Arena - through speaking engagements with civic, community, religious and other local groups.

Anyone that pushes for the Hawks to connect with the community is a friend of mine. I recently reached out to see if he would answer some questions about the upcoming Atlanta Hawks season. He not only accepted, but actually seemed happy to do it! A thousand thank yous to Mr. Rathbun who could have easily ignored me instead of graciously and quickly answering every last one of my questions. Ok a thousand and one. Thank you.

Right off the bat, care to give us a prediction on the Hawks season (record and seed)?

As training camp begins, optimism abounds. For the first time in recent memory, the Hawks are two-deep at all five spots, meaning they have quality depth that will make the team stronger and help cover the injuries that are bound to occur. I see no reason why this team cannot win 50+ games and challenge for the division title.

Obviously, it is a team game, but who do you think needs to step up the most for this season to be successful?

We have several talented guys. If they just do what they do to the best of their abilities then we will be fine. Minimize the mistakes (Josh Smith launching three-pointers for example; not utilizing Al Horford and Marvin Williams to their most-productive "best-spots" on the floor). But I caution all Hawks fans---every year is different. Team chemistry must be re-established. New people must be brought in. This what camp is for, and a crucial time for any contender.

Coach Woodson always seems to be "coaching for his job". Do you think that affects the way he coaches or is that just the nature of the beast for guys not named Phil or Pop?

He's out to win every night, and he'll worry about tomorrow tomorrow.

82 games is a lot of games. The season can be grind even for us fans. So I can't imagine what it is like for people like you and the team who are traveling and working during all them. Is the grind just something everyone gets used to or for some, is it a constant struggle?

Well, being a veteran helps you avoid the peaks and valleys. There is no such thing as a "must-win" game in the regular season, there is always another one right around the corner. But it is why veteran teams win and young teams lose. You will not find a young team in the NBA Finals. Only the vets who know how to play can survive.

The experts are claiming some teams in the East below the Hawks have improved. Who worries you the most? Which of the big Three in our conference do you think the Hawks have the best chance of catching?

I think they are all in play. The biggest thing the Hawks have to do to play with the big boys is do a better job on the road. They have made Philips a difficult place to play.

What is your favorite thing about being the play by play guy for the Hawks?

I love the game and I love being the conduit for the fans with the team. There are about 100 things that are favorites...too many to list here! It's a dream job.

You have been at this with the Hawks since 1996 so you have been through some good times, some bad, some really bad time, and some more good. You saw the transition to Phillips and the change of ownership. As a fan, I want the Hawks to really be a part of Atlanta's pulse, for Phillips to be a hard place to play and a great place to watch. Slowly, Atlanta seems to be turning back toward the team. How would you describe what you have seen over the state of the team right now and do you think Atlanta can become a full-fledged NBA town and is it as simple as winning or are there other obstacles?

Atlanta is an NBA town. All you have to do is look at the ratings for the Finals...astronomical for a city that doesn't have a team in the fight. The trick is to get those fans to be passionate Hawks fans. Winning that series against Miami will help tremendously. If this team can win two playoff series-and be one of the two best teams in the East-look out!

Watching that behind the scenes special last year on the Hawks, we got to see a side of the players that we don't always see (like Joe Johnson talking). In that vein, I was wondering who would you say is the funniest Hawk?

Joe and Bibby are good together...the guys enjoy each other's company. It's great to see, especially when we travel and spend so much time together.

Until last year Steve Smith (who I love) was in the booth with you then last year Dominique (who I also love) stepped in. Does switching partners change things up very dramatically for you? What is the best part of working with the Human Highlight?

The stories! We talk about his high school, college and NBA days. And I always learn something new or get a keen insight. Something will happen during a Hawks game and we'll talk during the half and he'll have another great story. It's wonderful.

Are you allowed to doll out "heat checks" on shots or is that strictly Nique territory?

Strictly Nique. I defer to the HOFer.

Finally, we are doing the 72 reasons to be excited about the Hawks. Your hair is on the list. We are at number 30 and it has yet to appear. Are you more frightened or honored?

Thanks again to Bob Rathbun for taking the time to answer my questions. In my book, you should be able to dole out "heat checks" whenever you like.