72 reasons to be excited about the Atlanta Hawks: #6 The Joe "freaking" Johnson face

Share All sharing options for: 72 reasons to be excited about the Atlanta Hawks: #6 The Joe "freaking" Johnson face

You knew which face I was talking about when you read the title. For over 3,000 minutes a season, Joe Johnson has the same face. Sure there are few disgusted looks, a couple laughs, but for the most part, Joe is as stoic as they come.  More often than not he is Eeyore in athletic, tall human form. The man is just consistent. Most nights he gets his points the same way. A lot of drives, a few jumpers, couple free throws, a three pointer here and there. It is versatile, but consistent. Same points, same assists, same shots. If it wasn't a skilled show, it would be a bad show.

But every so often, Joe "freaking" Johnson comes to play. And the shooting percentage goes up 15 points, the three pointers fall more often, and drives are tougher shots and easier makes. He is a top ten player in the league on those nights, and it makes you hit your buddy and spill your beer and yell Joe "freaking" Johnson because there is nothing else to say. And for a few seconds, a few glorious seconds, always right at the perfect moment, after the biggest shot, it makes Joe Johnson do this. 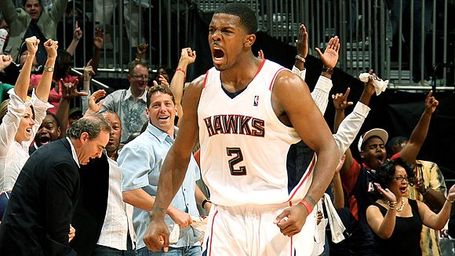