72 reasons to be excited about the Atlanta Hawks: #9 The CNN Center

Share All sharing options for: 72 reasons to be excited about the Atlanta Hawks: #9 The CNN Center 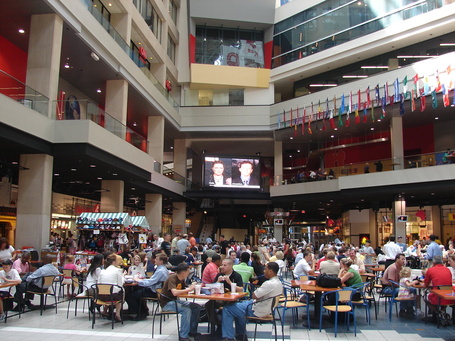 Basketball is a winter sport, and it can make tailgating difficult. And while Southerners take the tailgating seriously, we also take our cold weather seriously. As in, we don't like it. Espcially for the jersey wearers among us. Luckily for Hawks fans, we have a glorious architecture wonder that can cure most every known evil in the world. It is a sanctuary of bliss, beer, and Blitzer. It is the CNN Center. The Hawks own private, beer serving food court. How great is this place? The CNN tours overhead actually make it a stop on the tour. Seriously.

Unless it is a huge game, the food court has seating galore, every type of cheap food you could want, and did I mention beer? Cheap beer. Now, nothing good lasts forever and I think they realized they had something good and the prices have gone up a bit but you can still get a 24 oz Sweetwater draft for six dollars. Five bucks for domestic. Cans are even cheaper. I failing miserably to describe this adequately, but I can only say, it is a wondrous conglomerate of everything awesome. And I have spent hours sitting there eating Chick-fil-a, drinking Sierra Nevada, desperately trying to tune out Lou Dobbs, and talking Hawks. You really could not ask for anything more. And if you do (say for some sports), a Taco Mac and Dantanna's are on site too.

I can't even think of a proper analogy for this place. It is that good. So don't look for excuses, jump on MARTA, get here early, pick out which fine institution you will buy beer from and remain loyal to them for life (I am a Gorin's man myself), and take in the greatness that is the CNN Center. Thank you Ted Turner, thank you.