Share All sharing options for: Josh Smith, the enigma 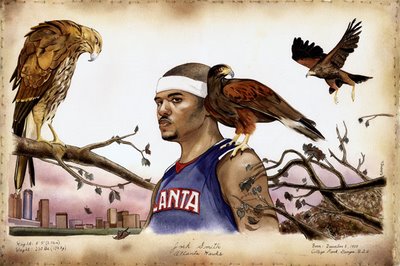 In sports, can an enigma ever really break out? Would they not have to undermine all that they are? People talk about Josh Smith every year like this is the one. This is it. Somehow this summer Josh figured it out. But do things so obvious to everyone else just come on a person that has somehow missed it all these years. Of course not, it has not become more obvious. Smith just chooses to miss it, and he succeeds despite his obvious weakness, some would say because of his obvious weakness. It is in fact not a weakness at all. It i just who he is.

Josh Smith is someone that has such athleticism that it was almost a knock against him coming out of high school. Because he had never had to rely on anything but God given ability in high school, he was worse than raw. He was untamed, unhumbled raw. And while Smith has certainly improved during his time in the NBA, his skills are still far below even most above average starters. He lacks any real post moves, he cannot hit the jumper, and even last year his free throw shooting faltered. In a league that is chalk full of unworldly athletes, Josh Smith excels on an uncanny ability to be more athletic than everyone in the league sans two guys. And that fact impresses and enrages most Hawks fans.

Josh Smith is so frustrating because we are not even asking for new skills. We are not hoping he becomes a 44% jump shooter or develops Hakeem like moves in the post. We don't have illusions of Josh becoming the "decent sized fundamental." All we want is for him to bottle the athleticism into the best possible package. We want no more jump shots. We want that unfair jumping ability to be used fairly and properly skying for rebounds on both ends. We desire a focused, self aware, bad intentioned Josh Smith. And unfortunately that, in and of itself, is a new skill. And new skills are not Smith's specialty. They are not really him at all.

It would mean we have a different Josh Smith on our hands and that would mean a different person. Josh would be breaking out of more than box scores. He would be breaking out of who he has always been. My friend who went to high school with him at McEachern and was on the basketball team the year before Josh joined said, "He just cherry picked. He barely tried. He didn't have to." It is not that Josh didn't work then or now. I believe he works his butt off. No, trying is not the issue. It is that he doesn't have to try new things.

Try being the best at anything for 18 years and then go to a place where everyone guarantees you won't be the best and you are still the top athlete. It will mess with your head. That will create ruts, self delusion, and success and it will all combine into an enigma of irreplaceable skill and frustration.

We want Josh Smith to break out, but breaks out entail new skills and better execution. In reality, we actually desire Josh Smith to change. And because change is so much easier for most of us than getting better, Smith becomes all the more maddening.

Yet, the Hawks are now what they always will be if Josh cannot change. The team simply cannot topple one of the giants in the Eastern conference without a Josh Smith that is willing to shed the spoiled, too athletic for his own good aura and become an unskilled, dominating force.

So are you interested in praying for a miracle? Pray for a realistic one. Josh Smith for breakout star for 2009-2010. The hope of the teams rest with your faith.