Paul Pierce is a bet welcher

Share All sharing options for: Paul Pierce is a bet welcher 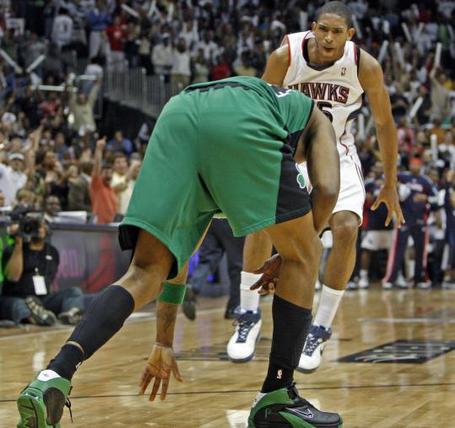 Maybe that wasn't a gang sign after all. Just a heads up on how much Pierce was planning on paying.

Surprising absolutely no one outside of Beantown, Paul Pierce has many qualities that normal people do not like.

Today, on 790 the zone, Al Horford told a story that happened sometime during the first two games of 2008 playoff series with Boston. Pierce and Al were jawing at each other standing at the free throw line. Realizing talk is cheap, they made a 10,000 dollar wager over whether the Hawks would win a game in the series or not.

Well, the Hawks actually won three, and Horford has yet to receive any money. I don't think Paul can plead ignorance. If I recall correctly, Horford made it pretty clear the Hawks won that first one.

Sports radio is many things, most of them on the far end of the annoying, but interviews with athletes is a gold mine with large nuggets of Paul Pierce hating goodness.

Also, apparently Jamal Crawford is quite the Casanova on radio. On a related note, Al Horford can officially do no wrong in my book.