72 reasons to be excited about the Atlanta Hawks: #15 Al Horford taunting people

Share All sharing options for: 72 reasons to be excited about the Atlanta Hawks: #15 Al Horford taunting people 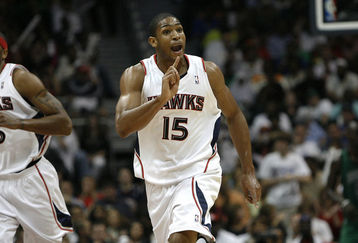 There are plenty of ways to get under your opponent's skin. Trash talk, dominating play, dirty fouls. The list is long. Taunting though is one of the most misunderstood, and it just so happens Al Horford is one of the best at it. Like anything that gets people angry, there are good ways to go about it and bad ways. Dehumanizing someone just to be a bully is less than desirable. But Horford mixes humor and mockery into a nice little soup of entertainment. His go to moves are pointing and laughing when someone gets dunked on, exaggerating total shock when a shot is blocked, and wiping the ball off before handing it back to the refs after an especially vicious rejection.The simple fact is, if you get embarrassed, big Al is going to make sure you know that everyone saw. And if you can effectively, but still playfully mock another player while getting the fans involved, you are doing good work. Plain and simple.

The thing about Horford is that almost all of his taunts are in response to someone else's good play. He is not showboating, he is not gloating, he is building the energy. There is a love of the game in the whole thing. For a brief time, he becomes a fan with the rest of 16,000 people in the building. Which means we get to be a part of the action. We get to stand right along side the players. And that is when taunting becomes a beautiful thing.

And in that rare moment when the taunt can't be quite so fun, when a message needs to be sent that the team is not intimidated, Horford will do that too, but unlike some, Big Al does not go after so 12th man to prove his point, he finds the captain of the team....and taunts the crap out of him.