72 reasons to be excited about the Atlanta Hawks: #16 Zaza's "and one" move

Share All sharing options for: 72 reasons to be excited about the Atlanta Hawks: #16 Zaza's "and one" move 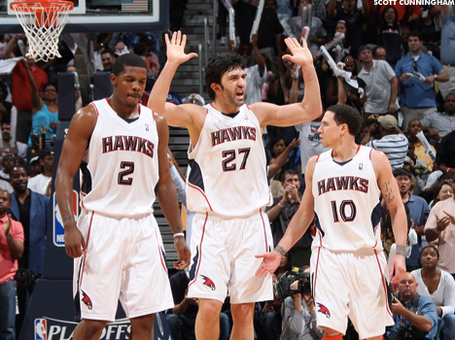 Far too high on the list, but I thought about it late in the process and it is far to great to leave off. Zaza Pachulia is a man of consistencies. The half-beard, the hustle, the traveling, the lack of jumping, the boards, and I could keep going. For days.

I love Zaza because I know what I am going to get from the guy every night and any negative about him is directly related to something he can't control. Like athletic ability. I tell people Zaza is my most reliable friend and we are not even really friends. He is that reliable.

And in this exact vein, every time Pachulia gets fouled and the shot goes in, Zaza calmly raises his right arm and non verbally but emphatically smooth says "count it." Every time. It is like Zaza doesn't even need a ref. If he played baseball, he would give the round tripper sign every time he hit a home run. And he would look awesome doing it.

I don't think it is possible within the rules, but I wish Zaza could retroactively receive a foul call on a made basket like five minutes after the actual foul occurred. Because if it could happen, he would be sitting on the bench and without missing a beat and without saying a word, Zaza would lift his right arm and go "count it."