Share All sharing options for: Peachtree Hoops Sizes Up "An opposing team's scout sizes up the Hawks"

Semi-anonymous blogger provides commentary on an anonymous scout's off-the-cuff description (as published at SI.com) of the Atlanta Hawks? This should prove a busy day for the upper right portion of the ultimately pointless/ironic blog post characteristics graph. 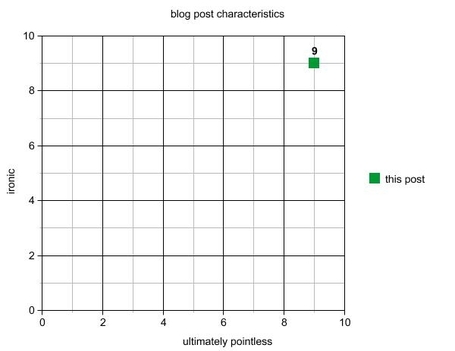 An opposing team's scout sizes up the Hawks

Expectations have risen by making the playoffs and having a great showing against Boston. Yet they only won 37 games last year. Keeping things in perspective, they've got to find a way to improve, because winning 37 is not going to make the playoffs in the improved East.

Who is their lead player? Joe Johnson tends to not take the last shot as much as you'd expect from a franchise player. You can tell a lot about him from his decision to go to a losing team by leaving a team that could've paid him good money and helped him win a championship. He hasn't done much in recent years to change that opinion. I've watched them play a lot, and he's a talented kid. But I'm not a fan. He's a good third player on a contending team. But he's not the guy you build around.

Micah Hart beat me to taking this bit of nonsense to task. I added the following comment to Micah's fine post:

That scout obviously doesn't watch the Hawks that often if he thinks "Joe Johnson tends to not take (sic) the last shot."

As to his other point, hey, Joe Johnson was the fourth-best player on a contending team when the Hawks chose to build around him. One could give the scout the benefit of the doubt and assume that he's very obliquely implying the obvious fact that Joe Johnson is a better player now, in Atlanta, than he ever was in Phoenix.

Al Horford was great. He would have been my vote for Rookie of the Year. Last year you did what you could to keep him off the boards. This year people have seen him, and they're not going to let him get as many free looks. People know he can shoot mid-range jump shots. He's a little jerky in his stroke, but he can make them. I think he's a Buck Williams-type guy in a lot of ways. Every time I've seen Horford, he has played hard the whole game. When he took out T.J. Ford on that layup [after which Ford missed 24 games with neck and back injuries], he didn't do it maliciously, but he made a hard foul. Some of his histrionics you can do without, like when he pounds his chest and waves his arms too much after he makes a play early. But that's not bad for this team because they don't have a lot of guys with that intensity.

If you don't think Al Horford is great, you don't like basketball. If you're bothered by his histrionics you're probably older than me and I can make fun of you for that. Go to bed, old man!

For them ever to be a championship team -- not just a playoff team -- Horford needs to play the 4, and they find a 5 who can really play up front alongside him.

Okay. A list of 5's who can really play: Yao Ming, Dwight Howard, Tim Duncan (oh, right, he's officially a power forward), Marcus Camby, Chris Kaman, probably Greg Oden. That's it. I don't think any of those guys are realistically available for the Hawks to acquire.

You shift Josh Smith to small forward and bring Marvin Williams off the bench. But until they go in that direction, they'll be the best 6-foot-8 team in the league with too many forwards on the roster.

Forwards on the roster: Josh Smith, Marvin Williams, partial credit for Al Horford, Othello Hunter. Three of them a couple inches north of 6-foot-8 and one one of them a full inch (at least) shorter. This scout does know that Josh Childress left, right?

When Smith played well last year, it was mainly because he quit shooting threes.

I wish I had gotten to watch the Josh Smith this guy watched last year. It sounds like the exact opposite of the player that frustrated me so often.

He can be a dominant player who can change the game, and when he's focused he is very good and a tough matchup. But he also goes through games where he seems lost, and if he makes a couple of mistakes and coach Mike Woodson starts yelling at him, then he's gone. The whole key to whether they're a 35- or 45-win team depends on him being able to figure it out every night. We see him and his team get keyed up to play Detroit or Boston, but they don't get up against teams like Charlotte. Smith can have a big influence on his team by not settling for jumpers and instead becoming more of an attacker.

But he should be moved to small forward (giving up the above referenced "great mismatch at the 4") for a hypothetically available center who can really play.

Mike Bibby has issues: Can he stay injury-free, be consistent and also be committed to playing defense like Woodson wants him to play?

No. Maybe (which I guess is a "no" if you're asking about consistency). No.

As a defender, he plays the passing lanes. But Woodson wants his players to be solid defenders rather than steals defenders, and the coach knows it all starts with the point guard.

Really? Then why has the team planned to use Mike Bibby, Anthony Johnson, Tyronn Lue, and Acie Law IV at the point for the last two years? They were a far better defensive team before Bibby arrived but that didn't have much to do with quality point guard defense.

Bibby enjoys having the ball in his hands, yet sometimes I think he shoots the ball a little quickly. Bibby knows his contract is coming up [he's a free agent after the season], so he'll want to have a good year and get some points up.

It's phrased like a criticism, but I'm struggling to figure out the downside of Mike Bibby having a good year and getting some points up. Impure motives? I'll forgive him that in exchange for above-average offensive production.

Backup point guard is another issue. Acie Law didn't produce like they would want as a high draft pick last season. But there were games where he did enough. He beat his man shooting off the dribble, he was good in all kinds of pick-and-roll situations, he got into the paint and he had late-game ability. But Woodson is more of a half-court guy who likes to call every play, and that works against Law, who is a good but not great shooter from the three-point line.

Again, I don't see the complication here (and didn't last year, either). Mike Woodson (in my opinion, mistakenly) wants the Hawks to play half-court basketball. He wants to call plays. Acie Law, in a fairly comprehensively disappointing rookie season, showed some ability, despite inconsistent health and playing time, to run the pick-and-roll effectively. I know the Hawks have pick-and-roll sets in the half-court. I've seen them run them. Why is this not a significant part of the offense when Acie Law is on the court leading the second unit? In a couple of weeks, I fear we'll learn that the answer, this year, has a lot to do with Flip Murray dribbling.

Marvin Williams improved his jump shot last year and became more of a threat. He needs to use his size to post up small forwards more often and not just be a tall, big body on the perimeter.

Amen. However, this should be less of a priority for the team than getting the ball to Smith and Horford in the post more often..

Flip Murray is going to be an open-court guy who will put the ball on the floor, but if he has to be backup point or run plays, then he's not as good. There's a reason he's played for so many different teams.

That reason: missing almost 60% of the shots he takes. Flip Murray is not a good player full stop.

I don't think they get any value from Maurice Evans coming off the bench. He isn't a tough-minded kid, which is why he's bounced around. He was a starter for a winning team last year [in Orlando], but I wonder if he has the makeup to go from starter to backup.

Maurice Evans has started 69 of the 306 NBA games he has played and came off the bench 62 times for a 42-win Lakers team the year before last.

I wonder if they might be better bringing Williams off the bench where he can play both forward spots. Then they won't miss Josh Childress as much.

I'm going to need a much more detailed explanation of how starting the guy who isn't tough-minded and has bounced around so you can then bring the better player off the bench is going to keep the Hawks from missing Josh Childress as much. I am not going to get that explanation, am I?

The problem with losing Childress is that they have a lot of guys who need the ball. He didn't. He just played. He was a stable personality and he could be effective playing without the ball.

Nothing I can take issue with there but it's a rather indirect way of saying the problem with losing Childress is he was a better basketball player than almost everyone else on the team then and now.

I'm a Woodson fan. But he gets too frustrated at times, and it's too long a year with too many possessions in each game -- especially with all of his young players -- for him to be on them all the time. That can wear on a team. The main thing is that he has a great up-and-down team, but he's so conscious of them not turning the ball over and making sure the right guy gets the right shot that he calls plays like a half-court team. If they played looser, they might turn it over once or twice more, but their guys would stay more focused and be more involved at both ends of the court.

But look at the other side of it: They're not a very good team yet he had them in most games last year and gave them chances to be successful.

I think the inability to let the players play the style of basketball to which they're best suited rather than the style of basketball that makes the coach most comfortable limited their chances to be successful (and that's the difference of opinion that explains why this scout says he's a Mike Woodson fan and I do not) but one should never forget that Mike Woodson has, for four years, coached teams constructed by Billy Knight.

He's a good defensive coach who tries to get the guys to respect the game, and when they don't, he gets frustrated. I'd really like to see him coaching a veteran team.

If you know GM Rick Sund and you look at Bibby's [$14.5 million] contract, I think you'll see a trade from them as the year goes on. I bet they try to trade for an impact player, probably to get either a point guard or center. I think they have to make a trade in order to get back to the playoffs.

I would hope Rick Sund, should he decide to trade Mike Bibby, would try to acquire an "impact player." However, the last time Mike Bibby was traded, he was worth Anthony Johnson, Tyronn Lue, Shelden Williams, Lorenzen Wright, and a 2nd-round pick. Somebody will have to value an expiring contract a whole hell of a lot to bridge the gap between the value of that collection of assets and an "impact player."