Not that the one he's attempting to communicate with in this case isn't capable of some petulance himself.

Hawks coach Mike Woodson and Josh Smith finally had their training camp dust-up Tuesday, ringing in yet another year together.

Woodson called his team together in a practice-ending huddle and began his speech by telling his team that they needed to take their game to another level with the regular season approaching.

He mentioned Smith by name, which prompted the fifth-year forward to react by saying he was willing to "take all the blame."

After a brief exchange the huddle broke and Smith headed for the locker room steaming at being called out and shattered his mouthpiece case against a wall. Woodson, smiling the entire time, warned his assistants and other players that Smith would be fine and that they shouldn’t worry. 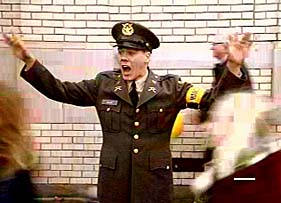 “Listen, it’s getting close to that time and we can’t go into this thing being cool about anything,” Woodson said long after the buzz had died down. “We had a good run last year and that run is over. You’ve got to build on that run. And the only way you do that is through hard work, on the floor and that carrying over into games.

I suspect that, more than they think you're tough, they're frustrated that you struggle to communicate your questionable tactical choices and that your in-game reactions generally demonstrate a slow-reacting panic, but I'm not there every day and I may be projecting how frustrated I would be, as a world-class basketball player (or eevn were I Mario West) playing for an incompetent head coach.

Also, please stop with this veneration of a 37-win season. It's just embarrassing.

"For me it’s about measuring myself. Coach is right. I do need to crank it up. And we do need to crank it up as a team. And I understand that when Oct. 29 comes I’m going to lay it all on the line. I’m going to play 82 games as hard as I can and do whatever it takes for my team to win, be it rebounding, blocking shots or scoring or whatever it is.”

He can be arrogant. He can be immature. I still believe that a good coach would overcome those obstacles and make Josh Smith a great player. I understand my belief in this will certainly be tested before it (if ever) becomes observable in the natural world.

"I went through a roller coaster when I first got here. But after a while, when you really learn your niche and play to your strengths it’ll come easier. If you don’t recognize that early, though, you’ll continue to struggle.”

If I thought this team would play to it's strengths I wouldn't be predicting 34 wins.